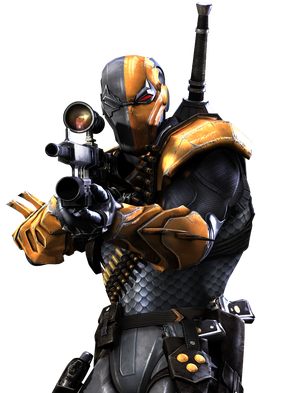 Deathstroke the Terminator first appeared in 1980, in the second issue of the book New Teen Titans. He was originally introduced as "the Terminator", a mercenary who was completing the terms of a contract undertaken by his son,Ravager, but he quickly became one of the main antagonists for the Titans. Deathstroke quickly became a fan favorite character and later in the series often allied with the Titans against mutual threats.

Following his injury in DC Universe: Last Will and Testament, Deathstroke appears in one of the four Faces of Evil one-shots, written by David Hine. Hine has explained that the series is part of the set-up for future stories: "All of the characters in this ‘Faces of Evil’ series were selected for their potential as major players in the coming year."

Even though the character of Deathstroke the Terminator predates James Cameron's film The Terminator by four years, the Slade Wilson character is now simply called Deathstroke, even by characters who had called him Terminator for years. The full title has not completely fallen out of use, having been referenced as recently as Justice League Elite.

Deathstroke next appeared in New York, holding officials hostage in order to lure the Titans into confronting him. Terra, a new ally of the Titans, and Changeling were the only ones available to answer the call. Terra knocked Logan out in an effort to prove herself worthy of being a Titan and fought Deathstroke single-handedly. Slade escaped as the other Titans arrived, but by then Terra had proven herself and the team offered her membership. Later that night, it was revealed that both Terra and Deathstroke conspired to fake the fight in a plot to infiltrate the team. It was also revealed that both shared an intimate relationship, despite Terra being fifteen years old.[1] The artist, George Pérez, noted that this constituted "statutory rape."Slade has a long history as an enemy of theTeen Titans, beginning when his other son, Grant, became an early Titans foe called theRavager, who was physically enhanced to fulfill a contract to kill or capture the Teen Titans. However, those enhancements proved fatal and Slade agreed to complete the contract. His first mission involved stealing the fictional element Promethium fromS.T.A.R. Labs and selling it as the ultimate weapon. He then kidnapped the Titans and placed them in the path of a Promethium bomb to test his device for the buyers, effectively killing two birds with one stone. The Titans escaped and pursued Deathstroke, but he severely wounded Garfield Logan, then known as Changeling, in his escape. This would be the start to a lasting animosity between the two.

Nightwing Deathstroke appeared in Nightwing #23 as a mercenary against Black Canaryand Conner Hawke as part of the "Brotherhood of the Fist" tie-in to the No Man's Land story arc.

Retrieved from "https://nightwing.fandom.com/wiki/Deathstroke?oldid=6676"
Community content is available under CC-BY-SA unless otherwise noted.