This article is a disambiguation page for Matron

The following is a list of links to pages that might share the same title.
Please follow one of the disambiguation links below or search to find the page you were looking for if it is not listed. If an internal link led you here, you may wish to change the link to point directly to the intended article.

Matron is an alias used by various characters within Batman Incorporated and Grayson comic book series . The first Matron is a male individual who was head of the British secret intelligence agency known as T.H.E.Y but was truly loyal to the espionage organization, Spyral. However, the second Matron was Helena Bertinelli in the Prime Earth universe. 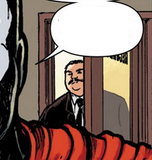